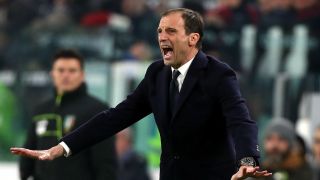 Massimiliano Allegri says Juventus need to dramatically improve their tempo despite returning to the Serie A summit with a 2-0 win over Chievo on Saturday.

The Bianconeri were some way off their best at the Stadio Marc'Antonio Bentegodi, but were given a helping hand by their ill-disciplined hosts.

Midfielder Samuel Bastien was dismissed in the first half after picking up two quickfire yellow cards, before Fabrizio Cacciatore received a straight red card for dissent on the hour.

Juve took full advantage of their two-man advantage as Sami Khedira and Gonzalo Higuain scored to secure a sixth straight Serie A win and leapfrog Napoli, who take on Bologna on Sunday, at the top.

Allegri was not impressed with his side's performance, though, and has identified one key area they need to progress in.

"We have to improve a great deal when it comes to the tempo, learning when to slow it down or speed it up, because otherwise we become too predictable," he told Mediaset Premium.

"It was difficult because Chievo were defending well. In the first half, we tried to move them from one side to the other to create spaces.

"Obviously, it was simpler after they went down to nine men, even if we lost a little balance towards the end and didn't realise there was still half an hour to go. We kept a clean sheet, got the three points away from home and are happy with that."

Gianluigi Buffon, who celebrates his 40th birthday on Sunday, received an early present in the shape of a place on the substitutes' bench - his first involvement in a matchday squad since the 1-0 win over Napoli on December 1.

Allegri was delighted to have his number one goalkeeper back and confirmed he will retake his place in the starting XI from Wojciech Szczesny in the Coppa Italia clash against Atalanta on Tuesday.

"Gigi is an extraordinary champion, we're very happy that he was back on the bench today and he will start in Bergamo on Tuesday," he added.

"Atalanta are in great form and we need to put in a strong performance, above all scoring an away goal, seeing as it's a Coppa Italia semi-final."