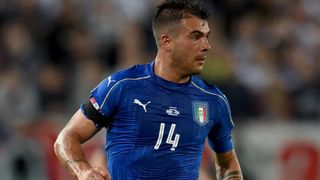 Juventus have confirmed that midfielder Stefano Sturaro suffered a knee injury during Italy's quarter-final clash with Germany on Saturday.

Sturaro lasted the entire 120 minutes in Bordeaux but was the only outfield Italian player not to take a penalty as they suffered a shoot-out loss to the world champions.

The 23-year-old confirmed he had suffered a twisted knee in the first half, but elected to carry on because he "couldn't think about tomorrow".

"Sturaro's injury, which is in the medial collateral ligament area of his knee, will be monitored as the midfielder proceeds with the appropriate treatment."

It is unclear how long Sturaro will face on the sidelines before linking up with his Juve team-mates in pre-season.

The Serie A club are aiming for a sixth straight Scudetto in 2016-17.