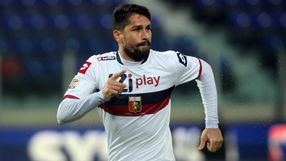 Former Juve forward Borriello struck in the 68th minute to leave Antonio Conte's side on 49 points at the top, six clear of Napoli and Lazio who earlier suffered a shock 1-0 home defeat by Chievo Verona.

Genoa, playing for the first time under new manager Davide Ballardini, moved up to 18 points but remained third bottom as Chievo climbed to 11th place on 28 points.

The Juve match was marred by controversy over two penalties not given to the champions in the second half and Juventus striker Mirko Vucinic went unpunished for what appeared to be a clear handball in the area.

Luca Antonelli looked to have pulled Vucinic's shirt as the forward stretched for Emanuele Giaccherini's 80th-minute cross, while Andreas Granqvist sparked furious protests from Juventus when he kicked the ball on to his hand in stoppage time but referee Marco Guida failed to award a spot-kick.

"I don't think there's much to explain, I think everyone saw the match. We saw various incidents and it's not the first time," a livid Conte told reporters.

"If the assistant and the fourth official both say it was a penalty then the referee can't say 'I wasn't able to give it'. That isn't football.

"We'll all human beings and we can all make mistakes, but you have to take responsibility for what you do. That is a stonewall penalty and that's all there is to it."

The protests from the Juventus staff carried on in the tunnel, with Sky Sport Italia reporting that Conte, Leonardo Bonucci and injured Giorgio Chiellini harangued Guida.

Genoa president Enrico Preziosi was equally angry, saying: "There's arrogance from Conte, he assaulted the referee, I hope something is done about it.

"We didn't complain about the Vucinic's handball... Milan lost a title to the [Sulley] Muntari ghost goal [scored against Juventus last season but not given because officials failed to see it had crossed the line]."

Fabio Quagliarella was on hand to put Juve ahead from Stephan Lichtsteiner's low cross on 54 minutes after the Swiss was expertly found by Vucinic.

Genoa struck 14 minutes later on a rare foray forward, Juraj Kucka's great work on the right ending with a superb cross from which Borriello gleefully headed home his sixth goal of the season.

Lazio were dominant but could not break down a resilient Chievo side and Paloschi tapped home his seventh goal of the season from their only chance of the game after Bojan Jokic's shot crashed against the bar and fell at the striker's feet.

"We didn't deserve to lose today, Chievo took advantage of the only chance they had," Petkovic said.

"We struggled because they always had nine men behind