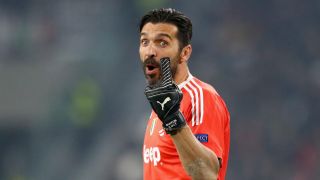 Gianluigi Buffon has again hinted he could extend his playing career beyond this season, but only if Juventus offer him a new contract.

The legendary goalkeeper, who has spent 17 years with the Bianconeri, has less than six months left on his current Juve deal.

Buffon, who turns 40 on Sunday, called time on his international career after Italy failed to make the 2018 World Cup, losing 1-0 to Sweden in a two-legged play-off in November.

A similar decision has been expected for his club career when his contract expires. However, the veteran suggested he could prolong his playing days, but only with Juve.

"I want what's best for the team, whether Juventus think I can still be important.

"I'd like it, but the best solution has to be found with the club, building together – if possible – a logical and shared path.

"Of course, I don't want to become a problem for Juventus or my team-mates."

When asked if he could be tempted to sign a deal with another club, Buffon added: "It's Juve or nothing."

Buffon returned to training this week after time out with a calf problem, and he has nothing but praise for his replacement Wojciech Szczesny.

"He's a great goalkeeper, and if we win the Scudetto a large part of that credit will be his," said Buffon.