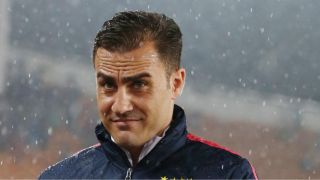 Former Italy international Fabio Cannavaro feels Juventus' squad is superior to that of Napoli and backed the reigning champions to successfully defend their Serie A title.

Juventus are three points clear of Napoli at the top following a 20-game unbeaten league run, during which they beat their title rivals 1-0 as they seek a fifth consecutive Scudetto.

And Cannavaro believes the strength in depth of Massimiliano Allegri's team will ultimately make the difference in the title race.

"I think Juventus are superior to Napoli because they have a stronger squad overall," Cannavaro - who played for both sides during his career - told Sky Italia.

"Napoli have paid the price for all the games they have played in Serie A, Coppa Italia and Europa League with pretty much the same starting XI.

"That makes the difference. Juventus can afford to play their reserves and still make it to the final of the Coppa Italia. Napoli, however, cannot rotate players and still reach a consistently high level."

Juventus resume Serie A action at home against Empoli after the international break, while Napoli are preparing for a trip to Udinese.