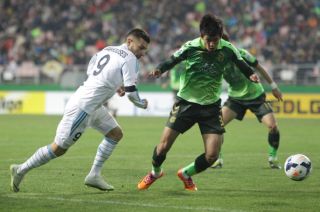 Choi Kang-hee's Jeonbuk side are seven points clear at the summit and can take another giant step towards the title with a fifth straight league win in the last fixture before the division splits.

Two goals in three first-half minutes saw off Incheon United 2-0 last time out, but Bluewings also head into the clash in good form - although anything less than extending their run to a 12th game unbeaten could realistically end their championship challenge.

Seo Jung-won's team conceded a late equaliser to be pegged back at 2-2 against Seongnam last Sunday and they can ill afford another slip-up.

Defending champions Pohang Steelers are in third but they lie 13 points behind Jeonbuk,  although they can take a firm grip on the AFC Champions League places by beating Sangju Sangmu.

Sangju's inconsistent form is the reason for their current 11th place, and ahead of the split they are staring at the very real prospect of relegation danger.

The Steelers, meanwhile, will seek to arrest an alarming run that has seen them pick up just two points from the last 15 available.

Elsewhere, the final spot in the top half before the split is up for grabs, with Ulsan and Jeonnam Dragons separated only by goal difference.

Ulsan, who hold the advantage, travel to Seongnam knowing that anything other than a win could open the door for their rivals, who are away at Incheon United.

Fifth-place Seoul could jump two places to third with a win over Busan l'Park, and the final game sees bottom side Gyeongnam entertain Jeju United looking to avoid a third defeat in a row.