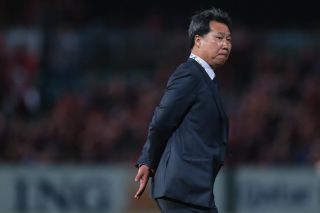 Ulsan have started positively in the Korean top flight, balancing AFC Champions League duties with domestic fixtures to sit top of the league table with 12 points from five matches.

They also have two wins in Asia but have not won either of their past two group games, most recently going down to Chinese Super League side Guizhou Renhe on Tuesday.

Busan I'Park's 2-1 win over Ulsan last season helped deny the latter the title, which was eventually claimed by Pohang Steelers.

A 90th-minute winner from Lee Jung-Ho saw Busan l'Park claim all three points, and Ulsan went on to fall one point short of winning the silverware.

Redemption will be on the cards for Cho Min-Kook's men, and Busan l'Park are out of form, having picked up just one point from their past two games.

A 1-1 home draw to lowly Sangju Sangmu, was followed by a 1-0 loss away at Suwon Bluewings.

Jeonnam Dragons and Jeonbuk Motors are chasing Ulsan, with the two sides two points shy of the leaders.

Dragons host champions Pohang in one of the early Sunday kick-offs, while Seoul will welcome Jeonbuk to the capital.

On Saturday, Gyeongnam will be out to continue their unbeaten run as they host Suwon Bluewings.

Gyeongnam have not lost in two matches, beating Incheon United 1-0 before earning a 1-1 draw away at Jeju United.

Sangju Sangmu are still eyeing their first win of the campaign, ahead of their home clash with Jeju United.