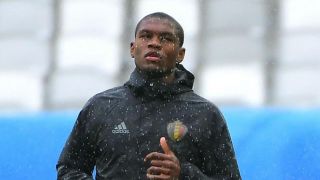 Christian Kabasele has signed a five-year deal with Watford after joining from Genk for an undisclosed fee.

The 25-year-old centre-back is with the Belgium squad at Euro 2016, but is yet to make his first senior international appearance.

Kabasele's arrival preceded the announcement of defender Gabriele Angella's permanent exit to Udinese after three years with the club.

Kabasele made 81 appearances after joining Genk in 2014, scoring seven goals, and his signing comes one day after Jerome Sinclair's switch to Vicarage Road was completed.

Watford are also closing in on a deal to sign Granada's 20-year-old Nigerian striker Isaac Success, who penned a farewell letter to supporters of the Liga club on Thursday.

The Hornets are believed to have turned down big-money offers for forward duo Troy Deeney and Odion Ighalo from Leicester City and Shanghai SIPG respectively.

OFFICIAL: pleased to announce the signing of Christian Kabasele on a 5-year deal: July 1, 2016