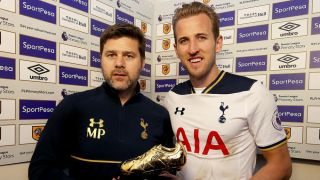 Harry Kane was confirmed as the Premier League's leading marksman for the second year in succession after netting a hat-trick in Tottenham's final-day 7-1 destruction of Hull City to take his tally to 29 for the season.

The England striker's achievement is all the more remarkable considering he has missed eight league games this season through injury.

By contrast, Lukaku has played every game this campaign, barring Everton's season-opener against Spurs, to score a career-high 25 times in the league while Sanchez has breached the 20-goal barrier for the first time in his career.

The Chilean ended the season on 24 strikes after the Gunners rounded off their campaign with a 3-1 win at home to Everton in which Lukaku also netted - a match which had been billed as a Golden Boot play-off before Kane's King Power heroics.

Kane becomes the first player to win the Golden Boot in consecutive seasons since Robin van Persie did so for Arsenal and then Manchester United in 2011-12 and 2012-13.