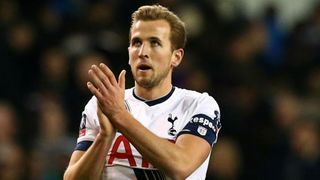 Harry Kane has scotched talk of a move away from Tottenham despite speculation linking him with a big-money move to the likes of Real Madrid and Manchester United.

Madrid and United are among those reportedly interested in the England striker, who scored his 50th goal for Tottenham with a late penalty in Sunday's 2-2 FA Cup third-round draw with Leicester City.

But the 22-year-old is adamant the rumours are little more than paper talk.

"There are always going to be rumours flying around but I'm happy here. The club is in a good shape, we have a great future and I'm raring to go so we will see what happens.

On potential incomings at Tottenham - who are six points off Premier League leaders Arsenal in fourth - Kane added: "It is down to the manager what he wants to do in the transfer window, us as players just have to focus on each game that comes along and try and do our best.

"That is what we will do and we have a busy period coming up now especially with the replay, so we have got to keep working hard.

"If the gaffer doesn't want anyone in, we are happy to go and fight for places in the league and fight for the cup competitions."