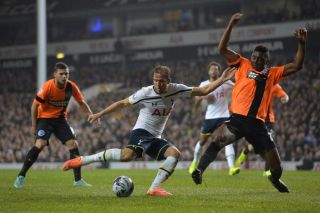 The 21-year-old striker struck his eighth goal in cup competitions for Tottenham in the 2-0 win over Brighton and Hove Albion, but he has struggled to nail down a starting berth in the league.

Pochettino has favoured Emmanuel Adebayor and Roberto Soldado in the striker role, with Kane limited to just 62 minutes in five substitute appearances in the Premier League this season.

However, Kane hopes his 74th minute strike at White Hart Lane will convince his manager to give him more chances to prove his worth in the upcoming league fixtures.

"I'm always happy to be scoring and getting those goals inside the box, those strikers' goals," he told Spurs' official website after the Brighton win.

"It [the number of goals] is a good return but I'm concentrating on the next game now and hopefully I will get some minutes and get some goals.

"These are the sort of games I want to be scoring in and getting myself out there, I always enjoy playing - I just want to keep playing and keep scoring."

Tottenham face Aston Villa on Sunday looking to get their Premier League campaign up and running after two successive defeats.