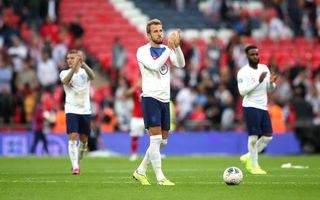 Harry Kane wants to keep banging in the goals that can help England win a major tournament after moving ahead of Geoff Hurst in the list of the country’s goalscorers.

The Tottenham striker scored a hat-trick in the Three Lions’ 4-0 Euro 2020 qualifier victory against Bulgaria at Wembley to take him to 25 goals in 40 games – one ahead of the World Cup winner.

If he were to carry that strike rate on the 26-year-old would obliterate Wayne Rooney’s record of 53 England goals, and his insatiable desire for scoring is not about to stop any time soon.

“Hopefully I can keep scoring goals for many years to come,” he said.

“Obviously whenever I put an England shirt on, it’s always to try and score and help the team.

“Whenever stuff like that (passing Geoff Hurst’s tally) happens it’s always a proud moment for me and it shows that the hard work I’m putting in is paying off.

“But as you know with me by now, it’s always to carry on and keep getting better, scoring more goals and hopefully I can score goals for England for many years to come.

“It’s down to hard work and making sure I keep doing what I’m doing in training, and as a team I know the boys will create chances so I have to be ready for it.”

Kane’s goals helped England to another handsome win in qualifying, which makes their participation in next summer’s European Championships all-but certain.

They will be among the favourites to lift the trophy on home soil next summer and Kane wants his goals to count for something.

“That’s always the aim, that’s always what you’re going to be judged on come the end of your career,” he said.

“Of course it’s great to get goals and individual stuff but the most important thing is winning team trophies and obviously England haven’t done that for a long time now.

“So that’s my goal as captain and I know all the boys want to win and want to win tournaments, but we’ve sat here and spoke about it for the last 10, 15, 20 years and longer and it hasn’t happened.

“So we had a little taste of success in the World Cup, obviously we didn’t get to where we wanted to go, but we have to use that as motivation to go all the way at the Euros.

“We’re going to hopefully have a few games here at Wembley and we really have to use that atmosphere and use it to our advantage.”