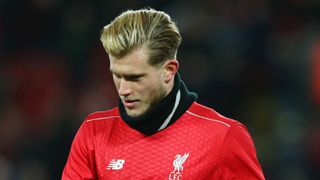 Loris Karius may have endured a tough first season at Liverpool but the German goalkeeper intends to fight for his place rather than return to the Bundesliga.

Karius was expected by some to take the number one shirt from the inconsistent Simon Mignolet at Anfield after his move from Mainz last year but struggled for consistency and was dropped by Jurgen Klopp in December after just 10 Premier League appearances.

Klopp said he was taking the 23-year-old "out the firing line" but remained confident Karius would bounce back and go on to prove himself.

Augsburg have been linked with a move for Karius but his agent Florian Goll claimed the shot-stopper has no intention of returning home.

"There is absolutely nothing to the rumours that Karius will leave," Goll told Goal.

"He did not sign at Liverpool for the short term - he believes in the vision of the manager and he wants to be fully fit and prepared to fight for the number one position from the first day back.

"He has already started his individual programme to keep fit during the summer, because he wants to be completely ready when pre-season starts.

"He is extremely motivated by the competition."