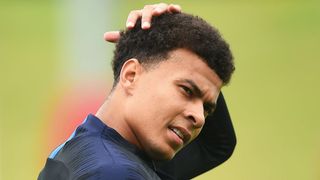 Ashley Young has urged Dele Alli not to take the edge out of his game, despite a flashpoint occurring between the two spiky England internationals during the Premier League season.

Tottenham midfielder Alli reportedly told the veteran Manchester United player to "retire with a zimmer frame" when they squared off in a 1-0 win for Jose Mourinho's side at Old Trafford in October.

Young is believed to have retorted by telling the former MK Dons player to "let him know when he wins the Prem", referring to an empty trophy cabinet during Alli's time at Spurs under Mauricio Pochettino.

At opposite ends of their respective careers, the two men have both been selected by England manager Gareth Southgate for the World Cup finals in Russia, where Young wants Alli to let his natural on-field aggression shine through.

"A lot of people say that he's got to take it out of his game," the former Watford and Aston Villa player said.

"But he's one of them that plays on the edge. Winds people up. That's just him. He's a fantastic talent.

England are no strangers to disciplinary issues hindering their hopes of success on the big stage, David Beckham and Wayne Rooney having been sent off at the World Cup in 1998 and 2006 respectively.

And Young is aware of the need for Southgate's squad to be on their guard when they go up against Tunisia, Panama and Belgium in Group G.

"You know on the pitch that players will try and wind people up," he said.

"And they'll target certain people. It happens in club football [too]. You've got to keep your head. We want to keep 11 players on the field at all times.

"We've got that togetherness and I think there's enough experience throughout this squad that if someone's getting wound up, to be able to pull them [up] on the pitch and tell them to calm down, or have a word with the referee and make them aware of what's going on."

Having failed to advance from the group stage at the World Cup in Brazil four years ago, and then losing to Iceland in the round of 16 at Euro 2016, relatively little is expected of England in Russia.

Young, though, is adamant they are not there merely to make up the numbers, as he prepares to participate in his first World Cup at the age of 33.

Asked about England's chances, he said: "I think at times you need luck and sometimes you create your own luck.

"But you don't go into a tournament thinking, 'we're going to get this far'.

"You go into a tournament wanting to win it and that's exactly what we're going to do."