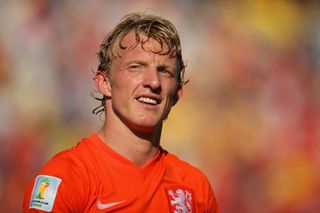 The Fenerbahce winger won his 100th cap in the last 16 triumph over Mexico on Sunday, filling in at left wing-back before switching to the right.

And Cillessen believes the 33-year-old has shown his full worth to the team.

"Dirk was really incredible," Cillessen is quoted as saying by De Telegraaf. "He first played left back, then on the right, and he kept going despite the heat (38 degrees celsius).

"He is an all-rounder, I think.

"I'll just make sure that he doesn't get my gloves because I'll lose them!"

The Netherlands will meet Costa Rica for a place in the semi-finals on Saturday.