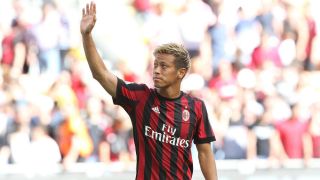 Keisuke Honda has confirmed he is to leave AC Milan at the end of the season, having scored against Bologna on Sunday.

Milan sealed a sixth-place finish and a spot in next season's Europa League with a 3-0 home Serie A victory, the Japan international netting their second after coming off the substitutes' bench.

But Honda has only made seven league appearances this season, starting once, and will move on after the last match of the club's season against Cagliari on May 28.

"My dearest Milan supporters, thank you," he said in a message on Twitter.

"It has been a challenging three and a half years but because of that I have been able to grow as a person.

"I will be leaving Milan after this season, but I look forward to seeing you again soon.

"I may not be a player then, who knows in what way we will meet. In the meantime I will continue to work hard every day to achieve my goals. Forza Milan!"

His announcement comes as Milan close in on the signing of Villarreal defender Mateo Musacchio, who is undergoing a medical with the club.