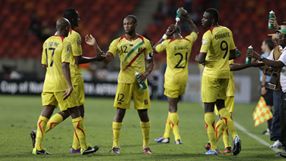 With French troops and government forces advancing against Islamist insurgents in the north of the West African state, Keita told reporters he was reassessing Mali's priorities at the tournament in South Africa.

"I'm not interested in medals for myself, I want one thing now and that is to give pleasure to my country. I take pleasure in running on the field with my young team mates and in the Mali colours," the 33-year-old former Barcelona midfielder said.

"The country is facing difficult times but I think our qualifying for the quarter-finals will bring a lot of joy to the people," he added as Mali began preparations for their last eight clash against the hosts in Durban on Saturday.

Keita, who now plays for Dalian Aerbin in China, turned in another masterful midfield display as Mali booked their place in the knockout stage with a 1-1 draw against the Democratic Republic of Congo on Monday.

He has made a reference to the conflict after each of Mali's three games at the tournament to date, even wearing a T-shirt with the slogan 'Peace in our Country' after their opening match in Port Elizabeth last week.

"Our country is going through one of the most difficult times in its history," he added.

"But the government is trying to regain all its territory and people are starting to look up. I get goosebumps when speaking of Mali. There is nothing to compare with the giving of joy to a country that suffers."

Mali are through to the knockout stage for the second successive tournament after they were surprise bronze medalists at the 2012 finals in Equatorial Guinea and Gabon.

However, a military coup last March caused major disruptions to the team, including the departure of coach Alain Giresse and a FIFA decision forcing them to play a home World Cup qualifier at a neutral venue because of unrest in the capital Bamako.