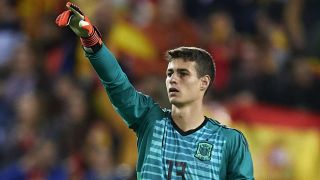 Real Madrid boss Zinedine Zidane insists Keylor Navas is still the best goalkeeper he could wish for, despite speculation of an imminent deal for Kepa Arrizabalaga.

Reports in Spain this week have claimed the LaLiga champions are to activate Kepa's release clause, reportedly set at €20million, in order to sign him in January.

Navas, who returned to action from an abductor injury in the Copa del Rey clash with Fuenlabrada this week, has vowed to win over any doubters as Madrid continue to be linked with David de Gea and Thibaut Courtois.

And Zidane believes the Costa Rican is still the finest goalkeeper around, although he would not discount the prospect of Kepa arriving from Athletic Bilbao next month.

"I've always got the best players so you can ask any question you like but I've got Keylor and, for me, he's the best," he told a news conference on Friday.

"I'm always going to be with Keylor and Kiko [Casilla]. Kepa's a good goalkeeper, sure. There's no doubt about that. But he's not my goalkeeper.

"I'm sticking with Keylor and Kiko. We'll see what happens when they open the market. We'll see if any one comes and if they can, they can. But I've got Keylor and I'm happy with that.

"I'm talking about my goalkeepers, I can't talk about other goalkeepers or players who could come here in the future

"There are lots of good players who could come here and play for Real Madrid in the future but at the moment it's not my problem."