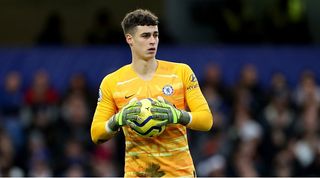 Frank Lampard has refused to guarantee that Kepa Arrizabalaga will return to the Chelsea line-up for Monday's clash with Manchester United.

Lampard dropped Kepa to the bench for the Blues' meeting with Leicester two weeks ago, preferring to start Willy Caballero between the sticks instead.

Kepa has endured a difficult second season at Stamford Bridge, and several supporters have called for him to be replaced this summer.

Chelsea broke the world-record transfer fee for a goalkeeper in acquiring the former Athletic Club shot-stopper for £71m in 2018.

But Lampard says he does not take such figures into account when it comes to selecting his side.

"The reaction has been good, as I'd expect," he said. "[He has been] training hard, head down. I haven't had lots of conversations with him this week and it'll be a decision for me to make.

“It doesn’t matter when you came to the club, I don’t take into account the fee. It’s the training that counts.

"I wouldn't say that [it was a wake-up call]. I wasn't looking for that necessarily. I think I spoke around the Leicester game and said that I have to pick the team as I see it on form in every position, so it was just a selection on that day.

"Now I know with goalkeepers there's a bit more to it than that. We know it's a slightly different role than everybody else. But I want everybody's reaction all the time to be spot on and he came out the team, I know what that means, I know how that will feel for him.

"Every player has it, maybe [Lionel] Messi is the only one who doesn't, or [Cristiano] Ronaldo, but the rest of us do. And I had it in my career many a time, it's part and parcel of being a footballer and you have to show character in those little moments. I've been pleased with the reaction."