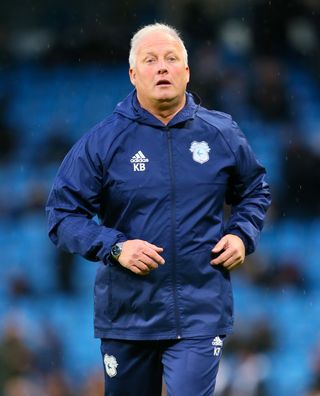 Assistant boss Kevin Blackwell is convinced Middlesbrough are much improved despite being without a Championship win so far this season.

New signing Chuba Akpom scored on his debut in a 1-1 draw with QPR at the Kiyan Prince Foundation Stadium, where Bright Osayi-Samuel’s equaliser earned the hosts a point.

Blackwell, who has filled in while manager Neil Warnock has been self-isolating after testing positive for coronavirus, has seen signs of progress after the struggles of last season.

He said: “We’ve been consistently doing well and were an inch away in the second half from winning that game.

“The performances are always going to be the key to results and I think if we keep producing these kind of performances then we will get the results.

“If you don’t get the win when you’re away from home then you certainly don’t lose. Defensively we’ve looked a lot more organised and stronger.”

Akpom opened his account with a glancing header from Paddy McNair’s 19th-minute corner.

It was the perfect start to his Boro career for the striker, who arrived from Greek club PAOK this week.

“It’s important as a striker that you’re seen to do your job and that job is scoring goals,” Blackwell said.

“It will take a lot of weight off him psychologically, whether he thinks about it or not.

QPR manager Mark Warburton revealed he left out Joe Lumley because of doubts over the goalkeeper’s future.

Lumley watched from the stands alongside Ryan Manning. The contracts of both players expire next year and the latter has rejected offers of a new deal.

Swiss keeper Seny Dieng was brought in for his Rangers debut and impressed.

Warburton said: “It’s down to contracts. We’ve got players at different stages with their contract [talks] and my squad reflected that.

“I was very impressed with Seny. I thought he had presence, his handling was good, he did well under pressure and his distribution is obviously good – he can throw it and release it.

“I thought he reassured the back four as well. He must be really pleased with his contribution.

“I’ve got to pick what is right at the time and do what’s best for the club. Seny was my choice and I was very pleased with him.”

Warburton praised his side but felt they should have taken all three points.

He added: “Middlesbrough are a tough team with a lot of physicality and we had to stand up to them, but it feels like we dropped two points.

“We had the better chances and much more of the ball. Overall there was lots of good play and we played some very decent football.”