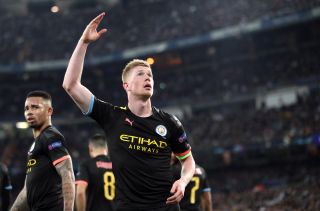 Manchester City midfielder Kevin De Bruyne says the 2020-21 season must not be compromised in order to complete the current campaign.

With the suspension of English leagues due to the coronavirus set to get extended beyond April 30 when Premier League clubs meet on Friday, the window to complete the current season appears to be getting shorter.

There is a clear appetite to play out the remainder of the campaign whenever that is possible, but De Bruyne does not want to see next term affected.

“I think waiting so long to make a decision can cause problems for next season,” he told Belgian newspaper Het Laatste Nieuws.

“It is not that we have a very long summer break and can just postpone everything. I would be sorry to stop early after such a good season, but if it avoids problems towards next year, it must be done.”

It has already been close to a month since the Premier League shutdown and with no resumption in sight the players are set for several months of inaction.

De Bruyne insists there must be some form of pre-season before the league can kick back into gear.

“I have no idea if we will still play,” he added. “Also in England they want to wait as long as possible with a decision.

“But as a footballer that is not clear. You are idle for six weeks, normally you need a preparation of three to four weeks.

“If we restart immediately, everyone will be in the treatment room after a few games. That cannot be the intention.”