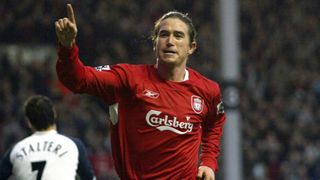 Harry Kewell has urged former team Liverpool to use the Anfield crowd to their advantage against Borussia Dortmund on Thursday.

Jurgen Klopp's men are well-placed to advance in the Europa League after a 1-1 draw in Germany in the first leg of their quarter-final tie.

And Kewell, who spent five seasons at Liverpool, told Omnisport the advantage of playing at home in the second leg could prove decisive for the Premier League giants.

"It's going to be tough, but you're playing at Anfield," said Kewell, who will be speaking at a Football Federation Victoria lunch as well as conducting 10 masterclasses around Melbourne in early May.

"You've got The Kop there as your 12th man, so I expect it's going to be a fiery game, a great game with high intensity.

"I think we're expecting a good game, like the Atletico [against] Barcelona game."

Watford Under-21s boss Kewell has enjoyed Liverpool's work under Klopp and is also eager to see the German's former club Dortmund in action.

"It will be a cracking game because I'm a big fan of Dortmund as well," Kewell said.

For more information on the clinics, visit www.harrykewellacademy.com; and you can find more info on the lunch at www.ffv.org.au/cib.