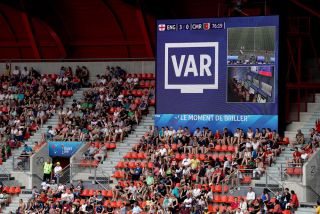 Video assistant referees, or VAR, will be used in the Premier League for the first time this season.

Here, PA looks at some of the key issues around the technology ahead of its introduction.

What decisions does VAR assist with?

In accordance with rules set down by the International Football Association Board (IFAB), VAR is concerned with looking at four key areas.

The categories of decisions that can be reviewed are – goal/no goal, penalty/no penalty, direct red card or a case of mistaken identity.

These areas will automatically be reviewed irrespective of the referee’s decision.

The Premier League counted 41 incorrect onside/offside calls last season, 31 of which coming when games were level or with a one-goal difference – correcting such decisions should now be commonplace.

How does it work?

A VAR room based at Stockley Park in west London will cover every Premier League game and will have a team of at least three people working with the match officials.

The VAR, an assistant VAR and a Hawkeye operator will work together to liaise with officials at the ground, ensure the right camera angles are made available to assist in the decision-making process and even calculate the amount of stoppage time to be added on for the VAR processes during a match.

The Stockley Park teams will be in constant communication with match officials, although these communications will not be available to spectators or fans to listen to during or after a game.

Will we see big delays to matches?

While other leagues may have beaten the Premier League to the punch in delivering VAR, the referees putting it into practice from this season have been able to train, as well as learn from the mistakes other competitions have made.

Premier League VAR will place a high threshold on when it intervenes, with the league keen to keep the high tempo and fast-paced football the division has become famous for in recent years.

The fact the team of officials have worked together for some time also means a level of trust will exist between referees and VAR, with the intention that fewer decisions will require the use of the referee review area (RRA) positioned at the side of the pitch and will therefore result in fewer lengthy stoppages.

How will fans know what is happening with VAR decisions?

Information for #MUFC fans on VAR in the #PL this season…— Manchester United (@ManUtd) August 5, 2019

While supporters watching the 2018 World Cup, for example, from home were able to see all of the replays and angles afforded to the VAR, match-going fans are sometimes left perplexed by such instances.

The Premier League are aiming to eradicate such issues by introducing graphics onto big screens in 18 of the 20 stadiums – Old Trafford and Anfield currently do not have the screens and there are no rules to force them to install the technology – as well as showing one replay of an overturned VAR decision to help fans understand what is happening.

There has also been talk of a mobile phone app for supporters inside stadiums which would also help explain VAR interventions, but Wi-Fi accessibility and other issues mean that has yet to be rolled out.

What big decisions from last season would have been overturned?

While real-time trials have been carried out, perhaps the easiest way to prepare supporters for what to expect from VAR is to look at some issues last season and consider if the VAR would have stepped in.

Manchester City captain Vincent Kompany was shown a yellow card by referee Anthony Taylor for a foul on Liverpool’s Mohamed Salah – while there was plenty of outcry following the game that the Belgian should have been sent off, VAR would not have suggested a red card as Taylor had not made a “clear and obvious” error.

Arsenal striker Pierre-Emerick Aubameyang saw a last-gasp penalty saved against Tottenham in March, with the game finishing in a 1-1 draw as a result of Hugo Lloris’ stop. VAR would have stepped in here and told the referee, coincidentally it was Taylor once again, to order a retake of the spot-kick as Spurs defender Jan Vertonghen had encroached into the penalty box before Aubameyang struck the ball.

Dropping down to the Sky Bet Championship, a fracas during Aston Villa’s 1-1 draw at promotion rivals Leeds saw Anwar El Ghazi sent off for the visitors for striking Patrick Bamford.

The Leeds forward was later hit with a two-match ban for “successful deception of a match official” after footage showed he went to ground despite El Ghazi making no contact – if that game had been under a Premier League VAR, El Ghazi’s red card would have been overturned and Bamford shown a yellow card – although that would have meant no suspension.

What if players or managers do not agree with a VAR call?

There are a number of ways players can be penalised following the introduction of VAR: yellow cards will be issued for excessive use of the VAR signal towards officials, entering the RRA, interfering with VAR communications and for dissent following a decision.

Likewise, managers and coaches would face the same Football Association disciplinary measures as they do now when criticising officials if they question decisions made by the VAR.