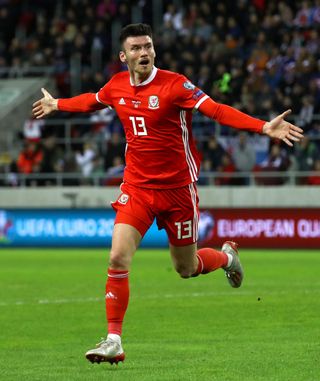 Wales stayed in the hunt for Euro 2020 qualification with a battling 1-1 draw against Slovakia in Trnava.

Kieffer Moore’s first goal for his country gave Wales hope of ending a 12-month wait for an away win.

But Juraj Kucka equalised eight minutes after half-time with a splendid volley from the edge of the area.

Slovakia were reduced to 10 men two minutes from time when Norbert Gyomber received his second yellow card, but Wales could not find the winner in what was a pulsating contest.

It was a must-not lose game for Wales with Ryan Giggs’ side three points adrift of Slovakia, albeit with a game in hand, and matches in Group E fast running out.

A draw was not a disaster for Wales given the fact that they had beaten Slovakia in Cardiff in March.

Wales knew that by avoiding defeat and drawing level with Slovakia in the closing rounds of games then they would finish above them in the final standings on their head-to-head record.

The Dragons could also draw on positive lessons from the past, with Daniel James’ winner against Slovakia seven months ago coming after a victory in Bordeaux that began Wales’ run to the Euro 2016 semi-finals in France.

Wales’ previous visit to the Anton Malatinsky Stadium in 2007 had also brought a 5-2 victory, with Gareth Bale having played in all three wins against Slovakia.

Bale was once again the man Wales were looking to for inspiration after his late winner against Azerbaijan last month had kept alive their qualifying hopes.

The Real Madrid forward retained the captaincy with Ashley Williams named on the bench.

Ben Davies returned at left-back with Wales’ unsettled nature in recent times reflected by the fact that Giggs had made his 16th defensive change in nine competitive games.

Jonny Williams was also recalled and there was a first competitive appearance for Wigan’s 6ft 5ins striker Moore, who started ahead of Tom Lawrence to lead the line in a 4-2-3-1 formation.

Moore was influential in the early stages as he won several aerial challenges with Wales prepared to be direct and bypass midfield.

But Wales escaped in the 11th-minute when Lockyer dawdled in possession and Ethan Ampadu ended up producing a goal-saving block to deny Robert Mak.

Slovakia were building pressure and Bale was booked for a tackle from behind on Stanislav Lobotka, but Wales were ahead after 25 minutes.

Bale had just headed against the crossbar when the ball was recycled for James to beat Peter Pekarik down the left.

The winger delivered a delicious cross and Moore – who has fought his way from non-league to international football – gave goalkeeper Martin Dubravka no chance with a perfectly directed header.

Wales wanted a penalty when Gyomber went to ground to stop Jonny Williams, although television replays suggested the defender got the faintest touch on the ball.

James and Bale both tested Dubravka, but Wales were grateful to see Kucka’s effort in the final act of an entertaining half slide just wide of a post.

Connor Roberts had the ball in the Slovakia net after the restart but the effort was ruled out for Moore’s push on Dubravka.

That was to prove costly for Wales as Kucka levelled after 53 minutes, volleying home after Roberts’ headed clearance fell to him 20 yards out.

Dubravka held a Bale shot from distance, but Slovakia were scenting blood and began to bombard the Wales goal.

Wayne Hennessey made a superb full-length save to deny Albert Rusnak and another effort from Kucka shaved an upright.

Moore went close to grabbing his second with an audacious back-heel at the near post and Rodon’s header was deflected over by Gyomber.

But Wales had to settle for a point before Sunday’s visit from Croatia – who strengthened their place at the top by beating Hungary 3-0 – and second place looks like going right to the wire.