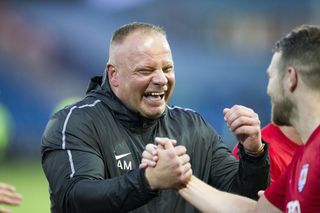 Rugby Park was hosting its first European tie in 18 years and Kilmarnock were looking to build on their 2-1 first-leg lead and secure a tie against Partizan Belgrade in the second qualifying round, but instead it was Connah’s Quay who progressed following a sensational 2-0 win.

Second-half goals from Ryan Wignall and Callum Morris (penalty) turned the tie on its head and ensured former Chelsea, Juventus and Italy assistant manager Alessio had a home debut to forget.

Both sides ended the match with 10 men as Stuart Findlay was shown a straight red for conceding the penalty and then goalscorer Wignall was sent packing in the closing stages.

Kilmarnock had worked wonders to qualify for Europe under former boss and now Scotland manager Steve Clarke but this was a humiliating exit.

For Connah’s Quay and their manager Andy Morrison this was a wonderful result and they proudly march on in the competition.

Connah’s Quay should have taken an early lead when Michael Wilde’s low cross was dummied by Declan Poole and ran for the unmarked Morris but from eight yards out and with the goal at his mercy he somehow put his effort wide.

.@InsallJamie returned to Scotland…and won the penalty that sent us through!— Connah's Quay Nomads (@the_nomads) July 18, 2019

Kilmarnock then spurned chances to make the breakthrough as Rory McKenzie drive forward and slide possession to Greg Taylor but the full-back scuffed his effort goalward and goalkeeper Lewis Brass saved. The rebound came back to McKenzie and he lashed in a shot but Brass was equal to the test as he pulled off a fine save to turn it wide.

Taylor was then presented with another chance when Burke pirouetted on the edge of the box to create space and then burst into the penalty area and his cross came to the Scotland international but once again he could not force the ball past Brass.

Kilmarnock right-back Stephen O’Donnell tested Brass twice in quick succession but the keeper stood firm to keep out his efforts.

Connah’s Quay wiped out Kilmarnock’s one-goal lead five minutes into the second half through a Wignall header.

Declan Poole swung in a dangerous cross from the right flank and Wignall glanced home a header into the bottom corner beyond the despairing dive of Killie goalkeeper Jamie MacDonald.

Kilmarnock were still ahead on the away goals rule but now this European tie was on the knife edge.

And Connah’s Quay Nomads were in the driving seat with 11 minutes to go as they grabbed their second of the night through a Morris penalty.

Sub Jamie Insall broke in behind the Killie defence and was hauled down inside the box by a last-gasp Findlay challenge.

The Killie defender was sent off by Hungarian referee Ferenc Karako and from 12-yards out Morris made no mistake.

Connah’s Quay Nomads were reduced to 10 men with five minutes remaining when Wignall received his marching orders after picking up a second booking following a crunching challenge on Alan Power.