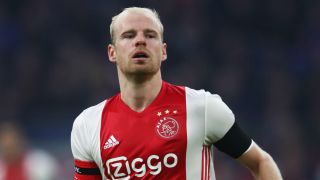 Peter Bosz's side may miss out on the Eredivisie title to rivals Feyenoord but have impressed in Europe this season, reaching the decider of UEFA's second-tier tournament.

At 24, Klaassen is approaching his prime and has been tipped to leave at the end of the campaign. The skipper, whose contract expires in 2019, last year insisted he was not interested in a potential move to suitors Napoli.

And Swart, a three-time European Cup winner with Ajax in the 1970s, feels the attacking midfielder must choose his next employer carefully.

"Davy Klaassen only leaves if he can go to a really good club because he has a real Ajax heart," he told Omnisport.

"I think [he would cost] somewhere between €20-25million.

"If I was him I would not go to Italy. I think he is not suitable for that. [Dennis] Bergkamp and [Wim] Jonk played there in the past. Serie A is a very difficult league.

"I [would] rather see Davy Klaassen playing in England or Germany. Those are great countries where he can play.

"He can play for Arsenal and Liverpool. At this moment he would definitely succeed at Manchester United as well. So there are a lot of clubs suitable for Klaassen, also in Germany."

Ajax have a proud record of developing talent within its academy, and their Europa League run could prompt interest from the continent's financial heavyweights during the next transfer window.

But Swart is confident the squad will not be broken up just yet.

"All these youngsters will stay at Ajax," he said.

"Maybe Kenny Tete - I think he's a great right-back - will leave this summer. [Jairo] Riedewald might want to leave as well because you have to play in your career. I understand that, because when you don't play, you're not growing as a player."