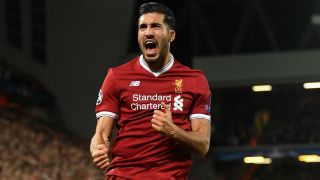 Jurgen Klopp says Liverpool must accept the risk of Emre Can signing a pre-contract agreement with another club in January as "part of football".

The Germany international has yet to agree fresh terms at Anfield and would be able to hold talks with other interested parties at the beginning of 2018 when he enters the final six months of his deal.

Juventus have been tipped to reignite their interest in the 23-year-old, while Bayern Munich boss Jupp Heynckes described Can as "dynamic and powerful" on Friday after the Bundesliga champions were also linked.

Klopp did not appear too anxious about the prospect of losing Can on a free transfer next year, though, telling a news conference: "As long as Emre doesn't give me one sign that his mind is somewhere else then I don't have to talk about this. Everything is okay from my side, but nothing new."

Asked about him agreeing a deal with another club in January, the Liverpool boss said: "It's part of football. If it happens, we can't change it.

"If there is a player out there whose contract is ending then we should try to do the same. It's a big opportunity. I cannot say it is a big problem, put pressure on the player and the club.

"We have to accept even an ending contract. There are two sides who could have done different. One is the club, the other is the player. It is a normal situation."

Klopp went on to praise defenders Joe Gomez and Alberto Moreno for earning their first senior international call-ups this week.

Klopp on Moreno: "It's quite difficult to get a call from the Spanish national team, they have not a lot of weaknesses. It's really nice." November 3, 2017

However, the 50-year-old felt England boss Gareth Southgate should also have included Daniel Sturridge and Alex Oxlade-Chamberlain in his plans for the friendly matches against Germany and Brazil.

"We were really happy [about Gomez and Moreno] but then heard at the same moment that Daniel Sturridge and Oxlade-Chamberlain are not in," he said.

"It's not our decision but if Gareth Southgate had seen the last three games I think for sure he could have invited all three.

"But Joe deserved it. He's a wonderful young player who has made big steps in the last few weeks.

"Alberto really deserved it. It's quite difficult to get a call from the Spanish national team. They don't have many weaknesses."

Liverpool's last game before the international break is Saturday's trip to West Ham, who are without a Premier League win in their last three matches, having conceded a last-minute equaliser against Crystal Palace last week.

The Reds have only won one of their last five away games in the top flight, though, and Klopp is keen to rectify that with a victory at London Stadium.

"I'm happy we have this record at home [the Reds are unbeaten at Anfield this term] but, of course, if you want to be successful you can't fly or drive to other stadiums and leave points there," he said.

"We need to take three points from other stadium as often as possible."