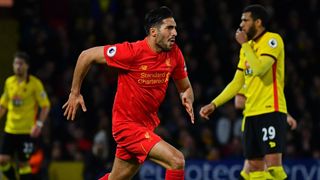 Liverpool manager Jurgen Klopp is positive about the prospect of Emre Can signing a contract extension but claims there is no pressure to secure the future of the in-form Germany international.

The versatile former Bayer Leverkusen player, whose deal expires in June 2018, has emerged as a key figure at Anfield this season, netting a specular bicycle kick to seal a 1-0 Premier League victory at Watford on Monday.

Addressing the media ahead of his team's match at home to Southampton on Sunday, Klopp confirmed the Reds are quietly confident of tying down the 23-year-old.

"Now after a bicycle kick everyone wants him to stay," the manager said wryly.

"It's no secret how much I like Emre. He likes the club. We're in talks. There is no pressure. All is good.

"I am quite positive. Keeping good players makes sense and Emre is a good player."

Klopp on Emre Can: "His biggest improvement is that his bicycle kicks are much better than before!" May 5, 2017

After struggling for consistency during his first two seasons at the club, Can is finally beginning to impose himself for the Reds.

"The biggest improvement has been with his bicycle kicks," Klopp joked.

"He's able to train without issues now and that helps the situation."

Lucas Leiva, meanwhile, is out of contract at the end of the season and, although Klopp praised the recent form of the experienced midfielder, it remains to be seen if he will be offered fresh terms.

"Lucas is in a good moment and is very important for us," he said.

"The club showed its best face when we celebrated his 10 years."