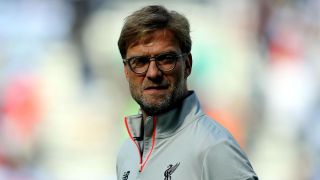 Jurgen Klopp expects "a few things will happen" at Anfield before the transfer window closes next month but insists he will not send Liverpool's most promising youngsters out on loan.

Klopp oversaw a third consecutive pre-season friendly win as Danny Ings and Ben Woodburn were on target in a 2-0 victory over Wigan Athletic on Sunday.

New recruits Loris Karius, Joel Matip and Sadio Mane all started at the DW Stadium, while Marko Grujic was unable to follow up his brace versus Fleetwood Town as he was laid low with illness.

Klopp boasts a sizable first-team squad and believes further incomings and outgoings are on the cards after Jordon Ibe completed a £15million switch to AFC Bournemouth earlier this week.

"That will happen, a few things will happen I am pretty sure," he told a post-match news conference.

"I don't know exactly what but on both sides, it makes no sense to stay in the squad and be in the squad when you don't have a real opportunity to play.

"When there's no chance to play, it makes absolutely no sense."

Different rules are set to apply for youngsters such as the 16-year-old Woodburn, with Klopp keen to oversee their development at close quarters.

"The players are young," he said. "We will not give on loan our very young players, absolutely no chance.

"We have a few players, maybe who want to leave us and I am pretty sure it will happen – and one or two more players will join us from other clubs.

"It's a long time until the 31st of August and we have to work a little bit."