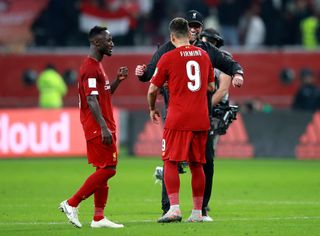 Liverpool manager Jurgen Klopp was fearful his injury-hit squad would be forced to endure unwanted extra time until substitute Roberto Firmino rescued them with another late goal.

The Reds boss admits he did not see the Brazil international sweep home in the first minute of added time for a 2-1 win over Monterrey in the Club World Cup semi-final as there were too many of his own players preparing to celebrate in front of him.

But he knew it was a crucial goal as it spared his players, many of whom have featured in the majority of the 27 games before this outing in Doha, 30 more minutes of physical exertion – and also killed off the Mexicans’ chances of springing a surprise.

Firmino converted a cross from another of Klopp’s substitutes Trent Alexander-Arnold for the winner, after Naby Keita’s third goal in as many games was quickly cancelled out by Rogelio Funes Mori, twin brother of former Everton defender Ramiro.

“I was actually afraid of extra time so I was more than happy that Bobby scored that goal,” said Klopp.

“We had to do a few changes because we had no other options but we wanted to do some other changes which meant we left Trent, Bobby and Sadio (Mane) off.

“I didn’t see it go in because there were so many players in front of me but I saw the reaction of the goalkeeper so I could start celebrating.”

Of another late, winning intervention Klopp added: “Staying on track is part of our game so I don’t think we can plan it but we should not think it is impossible.”

Monterrey, the CONCACAF Champions League winners, made life difficult for a below-par Liverpool but there were mitigating factors as illness to Virgil Van Dijk meant Joe Gomez was the one fit centre-back and the hole left by the Dutchman was filled by midfielder Jordan Henderson.

It was far from ideal but Klopp had little option with Joel Matip, Dejan Lovren, Fabinho and Georginio Wijnaldum all injured and youngsters Ki-Jana Hoever and Sepp Van Den Berg en route from England after their Carabao Cup exploits.

Liverpool were disjointed and reliant on goalkeeper Alisson Becker for a number of saves.

At the other end Mohamed Salah, relishing playing in front of a mainly Arabic crowd, pulled the strings.

“The attention Salah gets in this part of the country is massive and I thought he played sensationally and dealt really well with it,” said Klopp.

“Until the last minute he was there for the balls in behind. They tried to defend him with two guys from time to time and be really aggressive. I was really happy with Mo’s game.”

Salah was not happy with some of the close attention he received, however.

“I think it was a very tough game, they were very disciplined against us and all of us were feeling our legs,” he said.

“They were very aggressive and the referee didn’t protect us too much but I’m not here to complain about it.”

Monterrey boss Antonio Mohamed was less than happy Gomez remained on the pitch, suggesting he was only spared a second yellow card because he was a Liverpool player.

Harvey Elliott is set to join up with our squad at the #ClubWC after being deemed fit to travel to Qatar.— Liverpool FC (@LFC) December 18, 2019

The defender was booked for hauling down goalscorer Funes Mori and then handled late on, which had Mohamed furiously calling for another caution.

He succeeded only in getting himself carded, with Klopp immediately following him into the book for a technical area transgression.

“For me, there was a red card, especially the first foul and the second,” said Mohamed.

“So I talked to the referee. Maybe a Liverpool shirt has more weight, therefore the Liverpool player wasn’t sent off.”

Liverpool have made a late decision to fly 16-year-old Harvey Elliott to Qatar after the injury he sustained impressing against Aston Villa was not deemed serious.

Three of his team-mates on Tuesday night – Hoever, Van Den Berg and Caoimhin Kelleher – were already on their way and now Elliott will join them.

Elliott, Hoever and Van Den Berg were named in the official 23-man squad so will be eligible to face Flamengo in Saturday’s final but Kelleher will not as he was not on the original list.