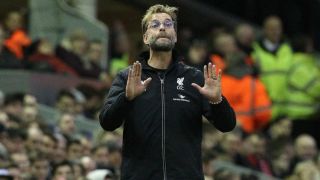 Liverpool boss Jurgen Klopp feels there is an unhealthy pressure on Premier League managers to spend "crazy money" in the January transfer window.

The Anfield side have been linked with a number of players in recent months, but Klopp feels bringing in new players for big transfer fees is not necessarily the answer for Liverpool as they chase Champions League qualification this campaign.

"I can understand why everybody makes January transfers. It seems to be the only possibility everyone is satisfied with," he told BBC's Football Focus.

"It is impossible to say 'No, we won't do it'. I can understand that other people feel pressure.

"It is better to do something than to stay together so you can buy somebody and say 'I tried'.

"You take a player for a horrible or crazy price to say 'we did it', and not be sure he can help you, because you cannot be sure."

Liverpool sit seventh in the Premier League table heading into this weekend's fixtures with 30 points from 19 games, trailing fourth-placed Tottenham by five points.