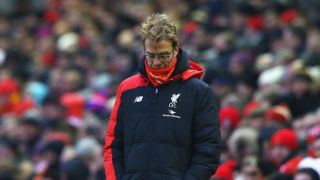 Liverpool manager Jurgen Klopp urged his side to be more clinical after what he described as a "frustrating" 1-0 defeat to Manchester United at Anfield on Sunday.

Wayne Rooney struck 12 minutes from time after Marouane Fellaini's header hit the crossbar to ensure United a fourth straight derby success on Merseyside after the hosts had created the better of the chances.

The likes of Adam Lallana, Jordan Henderson and Roberto Firmino all went close but Klopp felt his side's lack of cutting edge continues to hold Liverpool back.

"It's very frustrating. We can't say much about real things in the game as we lost," he told Sky Sports.

"We had more chances, more of everything but we have nothing. That's what we have to realise. That's because of a set-play.

"It's frustrating. It's a short corner, we have to defend it better.

"Usually we should try avoid the cross but in the end, the body contact came too late. Fellaini went the way he went, then that's how it is after hitting the crossbar.

"Rooney is free and used his chance, we didn't use ours."

Liverpool continue to search for consistency under Klopp and the German believes calmer heads in front of goal will improve fortunes at Anfield.

"What everyone can see is that we know the way to goal," he added.

"But to score in the zones where it is interesting and decisive, sometimes you need luck and other times you have to be more cool.

"It is how it is, everyone can see we took it as a derby and invested a lot. The guys tried everything but one situation decided the game.

"We didn't take our chance and they did, that's the end."