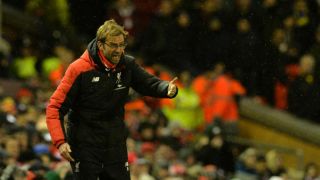 Jurgen Klopp has suggested he had the opportunity to replace Alex Ferguson at Manchester United in 2013 but could not seriously consider any offer as he had unfinished business at former club Borussia Dortmund.

Klopp will take charge of Liverpool against United for the first time since arriving at Anfield in October on Sunday, having ended a seven-year association with Dortmund at the end of last season.

Ferguson - who retired from management in 2013 - has made no secret of his admiration for the German's work while at Dortmund, previously expressing his fear that Klopp could make Liverpool better than United over the coming seasons.

And Klopp revealed he had the chance to take over from the United legend in 2013.

"We spoke. We spoke not a lot but, for me, it was a lot. It was a big honour, the whole talk," he told reporters.

"I did not hear about a real offer but, if there was, I could not have done it. I first had to finish the job with Dortmund and then think about other things. Maybe that is not smart but that is my way.

Klopp will go head to head with Louis van Gaal this weekend for the first time since the pair faced off as coaches of Dortmund and Bayern Munich in 2011.

The Dutchman has come in for criticism over United's style of play and lack of goals this term, with Klopp eager for his side to entertain where possible.

"First of all I am a football fan. If I watch I want to be entertained. It is why you are interested in it," he added.

"It would not be the same game if people only go to the game and only think about tactics. I like football because of the moments you can enjoy. Not just a perfect goal but a perfect challenge - the atmosphere and everything."