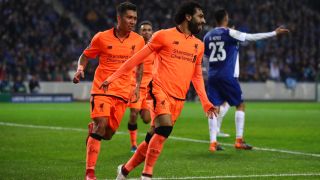 Salah's latest goal helped Liverpool to a 5-0 thrashing of Porto in the first leg of their Champions League last-16 tie on Wednesday as Sadio Mane scored a hat-trick to go with a Roberto Firmino strike.

The Egypt star became the second fastest to reach 30 goals for Liverpool (36 games), second only to George Allan.

And Klopp hopes there is even more to come from Salah, who has starred since arriving from Roma in the off-season.

"That he plays a good season, I recognise that already. But it's of course very important for us," he told a news conference.

"I think each goal was kind of a winner and that's very important. We spoke about Mo in the last few weeks, completely deserved, but obviously Sadio had his comeback tonight, very good, and Roberto was there again after outstanding work rate again.

"It was good. Ox [Alex Oxlade-Chamberlain] obviously as well. Congratulations but hopefully he [Salah] will not stop."

While Salah has starred, hat-trick hero Mane has been unable to reach top form so far this season, but he showed signs of his best against Porto.

Klopp said he was glad to see Mane, who now has 12 goals this campaign, recapturing some of his best form.

"He gave the right answer. That's good. I said to him after the last game, 'finally, you're back' immediately after when we talked on the pitch," he said.

"Tonight he showed it again what a fantastic player he is. He was always important, he was always fantastic for us, even in his not-that-good moments. That's a real quality if you are not 100 per cent and still scoring, maybe not that often but involved in goals then that's really important.

"Then they will come if you keep on working really hard like he did then there can be a moment like this.

"The first one was a little bit lucky I think, but then the other two were being in the right place the second one and using your fantastic skills for the last one. Good, really good, and I am happy about it."