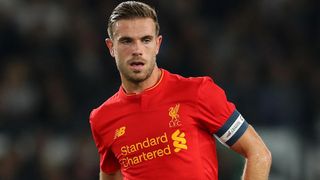 Liverpool manager Jurgen Klopp is unsure when captain Jordan Henderson will return, but refused to rule out a comeback this season.

Henderson, 26, has been sidelined since February with a foot injury and is yet to resume full training.

While Klopp remains uncertain about a return for the England international, he said it could still be possible late in the campaign.

"It is too early to say [if his season is over]. Next season is the latest moment, of course, but anything can happen," the German told UK newspapers.

"We stay positive because he is strong. The moment someone gives him the green light he will be back in a second because of his attitude and character.

"I am not thinking about the start of pre-season but that would be the latest moment he is back."

Chasing a top-four finish in the Premier League, Liverpool have matches against West Ham and Middlesbrough to finish their campaign.

Henderson's injury could also rule him out of England's June internationals, including a World Cup qualifier against Scotland.

But Klopp said the complexity of the injury made it tough to judge a possible return.

"Like it is always, you wish a ligament was snapped. Then you know if you fix it or wait for it, it will be six weeks, eight weeks or whatever," he said.

"This is the kind of issue where you have to wait. That is how the body is sometimes.

"Jordan can manage really well. It was the medical department that said he has to rest. We still have to."