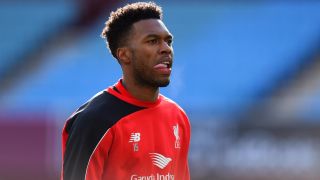 Liverpool striker Daniel Sturridge says pre-season under Jurgen Klopp has been the most intense he has ever experienced.

Klopp has been conducting repeated, high-intensity training drills during his side's stay in the United States, in between International Champions Cup matches with Chelsea and AC Milan.

Sturridge struggled to stay fit for large spells of last season, but enjoyed a strong run of form in the Premier League in March and April before earning a place in England's Euro 2016 squad.

And the 26-year-old, who sat out the 1-0 defeat to Chelsea at the Rose Bowl, hopes to hit the ground running in 2016-17 after such demanding fitness sessions.

"It's a lot more intense, probably the most intense I've ever experienced at any club," he told the club's official website.

"It is just a different intensity and a different kind of pre-season. It is certainly something that everyone is getting used to and will hopefully put us in good stead for the season.

"There has been a lot of hard work and a lot of running sessions, tactical sessions as well. It has been going well.

"I am feeling fresh. Pre-season is about pushing your body to the limits, so there has been a lot of sessions. You have to push yourself through the sessions as best you can."

Sturridge endured disappointment at the end of last season, when he opened the scoring in the Europa League final for Liverpool only to suffer a 3-1 defeat to Sevilla.

A dismal Euro 2016 campaign with England followed, with his winning goal against Wales the only high point of a tournament in which they were knocked out by Iceland at the last-16 stage.

But Sturridge says the defeats are now forgotten, adding: "It is the past – it' gone.

"It's something you reflect on at the time and then you move forward and try to put it behind you and focus on the future and there hopefully being more finals and success for the team.

"You learn from your mistakes and that's the most important thing."