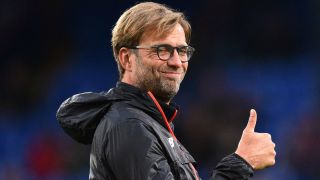 Liverpool manager Jurgen Klopp denied players held too much power, insisting only the Leicester City board should be blamed for Claudio Ranieri's sacking.

Reports suggested senior players had voiced their dissatisfaction with Ranieri after Leicester's 2-1 first-leg loss to Sevilla in the Champions League last 16.

The Italian was sacked on Thursday, but Klopp – whose team face Leicester on Monday – said only the board was responsible.

"It depends always on the board. As long as the players talk together there is no problem. If they start talking [to the board] about you, for this you need an ear on the other side.

"It is not about how powerful [players are]. The players need to be powerful but not in sacking managers.

"It's not like the Leicester players did it. It is if someone asked, they gave an answer."

Klopp said maintaining the relationship was straightforward and believes Liverpool proved theirs was in a fine state in January.

Liverpool won just one of nine games in the first month of the year, including slipping out of Premier League title contention and two cups.

"It's not like we come together every day and hug each other. We enjoy the work. I know what they want, they know what I want, so it is very good information," Klopp said.