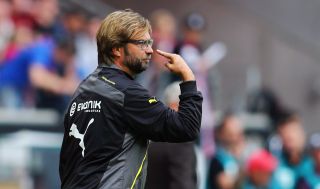 Hamburg thrashed Dortmund 4-1 at the latter's Signal Iduna Park in February and instead of avoiding the topic, Klopp has embraced the idea that his team want to right that wrong.

Dortmund dominated the match last season but were stunned by braces from Artjoms Rudnevs and Son Heung-Min after Robert Lewandowski had given Klopp's team the lead.

Heading into Saturday's fixture, Dortmund are top of the Bundesliga with four wins from as many games, while Hamburg are 12th with one victory and a draw.

"Obviously we are looking to get things straight after the last match against them (Hamburg)," Klopp said on Thursday.

"We have to admit we played really badly last year.

"It was bizarre, we dominated the game, had more than 30 shots on target, they had four and we lost."

The game against Hamburg is the start of a busy finish to September for Dortmund where they will play five matches in 15 days.

Dortmund will also travel to Napoli for their opening game of the 2013/14 UEFA Champions League, while they will face Nuremburg and Freiburg in the Bundesliga, plus 1860 Munich in the DFB Pokal.

But Klopp has argued Dortmund has been preparing since the start of the season for this busy fortnight.

"Everything we did up to now, was the preparation for this stage," Klopp said.

"If you are honest and check the team sheets, you have to think we can win all these matches.

"Not because we are better than them but more because of the importance of the games.

"This difficult phase begins with Hamburg, it's a home game.

"Last year they didn't play like they were the away side.

"This year we will try to do better."