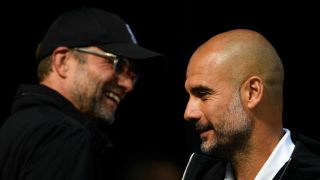 City can become the first team in Premier League history to register 100 points in a single campaign by beating Southampton on Sunday, a feat that would round off a season where Guardiola's men have swept all before them – all, that is, apart from Liverpool.

A record-breaking run of 18 consecutive Premier League victories laid the foundations for glory in the first half of the season, with a 5-0 thrashing of 10-man Liverpool at the Etihad Stadium fuelling City's ambition in September.

Talk of an undefeated domestic campaign had started to build by the time the leaders headed to Anfield in January, but Klopp's ferocious side prevailed 4-3 in a thriller.

Worse was to follow for Guardiola on Merseyside, as a 3-0 first-leg defeat put the Champions League quarter-final beyond his team, who were beaten 2-1 by in the return.

Liverpool progressed unchecked to a final date with Real Madrid in Kiev – an achievement that means the 25-point gulf between themselves and champions City, along with a failure to make certain of a top-four spot before the final round of fixtures, has avoided a degree of scrutiny.

"I'm pretty sure this season they were a big contender and they will be next season," Guardiola told reporters.

"I will not say just Liverpool [will challenge] but it's still true. Liverpool, the way they play and the quality of their players - not just up front, I think [Virgil] van Dijk has helped them a lot to be more consistent in the defensive department.

"We are 25 points in front. It's difficult to say it was difficult, but it was."

"Jurgen is a top manager, an excellent manager," he said. "He's created a model that has an offensive style that's always thinking about the spectators.

"He is always positive and creating good environments in his clubs. I admire him because [City midfielder Ilkay] Gundogan was with him, [Bayern striker Robert] Lewandowski was with him and every player speaks so well about him – as a manager and a human being."

Discussing a playing style that has given him plenty of headaches down the years, Guardiola acknowledged Klopp's more direct approach when compared to his own – servicing the forward talents of Roberto Firmino, Sadio Mane and PFA and FWA Player of the Year Mohamed Salah – can be particularly potent.

"I think both teams [City and Liverpool] want to attack, Tottenham do as well," he explained.

"It doesn't matter what happens, they want to try to attack. But I think the way they attack and defend is a little bit different.

"They play more here [centrally]; sometimes we look more for the sides to attack. They are more direct with the wingers. Mane, Salah and Firmino - they play more together and they attack more in front.

"But I think the idea is quite similar in terms of they want to try and win a game [because of] themselves. They don't wait for what will happen.

"They want to try and make it their game. I wish them all the best in the final. "