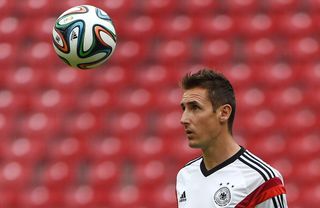 Italy and Germany have been the two best teams at Euro 2016 so far, the World Cup's all-time leading goalscorer Miroslav Klose believes.

The two nations face off in Saturday's quarter-final in what is a repeat of the 2012 semi-final, which Italy won 2-1 thanks to a Mario Balotelli brace.

Germany have not beaten Italy in eight attempts at major international tournaments, although they won 4-1 against the Azzurri in a March friendly.

Klose, who retired from international football after Germany won the 2014 World Cup, said his country has a "good chance" of winning the title if they beat Italy.

"I don't see a clear favourite, but I'm really excited to see the game played out," Klose told the DFB website.

"I watched the friendly back in March with my family in Munich. I thought Germany played really, really well that night and Italy were rather disappointing. So far at this European Championship both teams have excited me.

"No team has played as well as Germany and Italy at Euro 2016 so far," Klose said. "If Germany get past Italy, they have really good chance of lifting the title.

"But even then they have to keep focusing on taking things one game at a time. Potentially meeting France in the semi-final will be anything but easy, but they've shown weakness in defensive areas."

Germany have kept clean sheets in all five of their matches at Euro 2016, but Klose said his team lack a "cutting edge" at the finals.

"I think that any potential fear from Germany's side will quickly turn into motivation knowing that they have to get it right this time," Klose said. "But in case we do fall behind, no one should think 'oh, here comes another defeat'.

"We have the quality to prevail against Italy. What we sometimes lack is the clinical touch when we create chances against defensively solid sides."