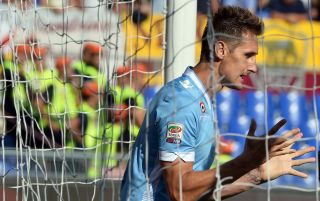 The 35-year-old Germany international striker joined the Serie A club from Bayern Munich in 2011 and has gone on to enjoy two fruitful seasons at the Stadio Olimpico, scoring 28 goals in 60 league appearances.

Injury has restricted his time on the pitch this term, though, and Klose - who is his country’s joint record scorer with 68 goals - is likely to leave Lazio at the end of the current campaign.

And the former Werder Bremen man has indicated he will choose between a move to the US or an emotional return to first club Kaiserslautern.

"I have two offers from the States and I could return to Kaiserslautern where I started my career," Klose told Gazzetta dello Sport.

"I will make up my mind in the next few months."

Klose will hope to be fit and firing in front of goal again soon as he bids to make Germany's squad for next year's FIFA World Cup.

The veteran has scored 14 goals in three World Cups, leaving him just one short of record holder and legendary Brazil striker Ronaldo.