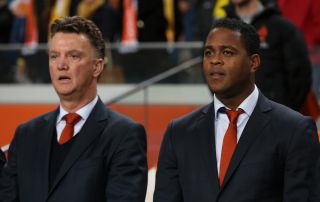 Van Gaal, 62, is favourite to succeed David Moyes at Old Trafford following United's decision to axe the Scotsman on Tuesday after just 10 months in charge.

Some reports have even suggested a deal has already been reached for the outgoing Netherlands coach to take charge of the Manchester club next season, though United have denied those claims.

Kluivert is part of van Gaal's backroom staff with the Netherlands, working as an assistant ahead of the FIFA World Cup in Brazil, and the former Dutch international has thrown his support behind his countryman.

"He would be absolutely the first pick of any club, especially top teams everywhere in the world," Kluivert told Talksport.

Kluivert added: "He likes to let young players make their debut if ready for it.

"The most important thing at the moment is I'm personally enjoying working with him and with the Dutch national team. We're going to the World Cup and hope to do well."

Kluivert is tipped to follow van Gaal to Old Trafford, should the former Bayern Munich coach take the reins.

And 37-year-old said it would be an 'honour' to work alongside van Gaal at club level.

"Sure I would (do the job) wherever in the world because I love working with him," he said.

"It doesn't matter what club it will be if he asks me to join him, I would be absolutely honoured to be on his side."