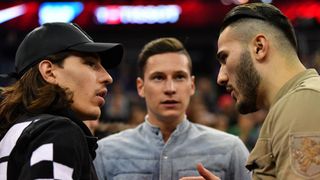 Sead Kolasinac and Shkodran Mustafi tried to tempt Julian Draxler to Arsenal during an NBA match in London on Thursday, but the Paris Saint-Germain player gave little away regarding his uncertain future.

Draxler impressed upon joining PSG from Wolfsburg 12 months ago, but has found himself battling with new arrivals Kylian Mbappe and Neymar for a place in the starting XI this season.

The former Schalke playmaker attended the Philadelphia 76ers' match against the Boston Celtics at the O2 Arena along with several Gunners players - including international colleague Mustafi and ex-Schalke team-mate Kolasinac.

Asked if he wanted Draxler to join him at Emirates Stadium, Mustafi joked: "That's the reason why he came here."

Kolasinac added: "Julian is a very good friend of mine and a good football player.

Asked if he liked London, Draxler said: "Yes, but mostly because of my best friend Sead and of course because of my [Germany] team-mate Musti [Mustafi].

"The main reason why I came here is NBA and not really much besides that."