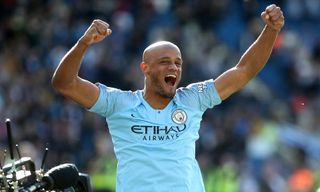 Vincent Kompany decided to end his trophy-laden 11-year stay at Manchester City after being made an offer he could not refuse by his old club Anderlecht.

Less than 24 hours after lifting the FA Cup, his 10th major honour since arriving at the Etihad Stadium from Hamburg in 2008, the 33-year-old Belgium defender announced on Sunday that he was leaving to take up the post of player-manager with the team where he launched his professional career.

If that came as a shock to City’s fans, it was a decision Kompany felt compelled to make.

In an open letter to supporters, he wrote: “I choose to be grateful for the past, but remain ambitious and driven for the future.

“For the next three years, I will take up the role of player-manager of RSC Anderlecht. Belgium’s finest.

“This may come as a surprise to you. It’s the most passionate, yet rational decision I’ve ever made.”

Although plagued by injuries in recent seasons, Kompany has continued to make a major contribution, and his stunning goal against Leicester in the penultimate game of the Premier League season paved the way for a fourth title success.

An Open Letter to the fans.Part 2 of 2And yet I choose to rebel against what an end wants to be. I choose to be…

There had been speculation that he would sign a contract extension, but the lure of a return to Anderlecht, whom he first joined as a six-year-old, simply proved too strong to resist.

He said: “The end of this season couldn’t be more memorable. I have lived the dream here.

“I have learned so much the last three years from an incredible manager. Pep Guardiola reignited my love for the game.

“I have decided to take up the challenge at RSC Anderlecht. Player-manager. I want to share my knowledge with the next purple generations.

“With that, I will also put a bit of Manchester in the heart of Belgium.”

In all, Kompany made 360 appearances for City and scored 20 goals, in the process securing four Premier League winners’ medals, two in the FA Cup, four in the League Cup and two more in the Community Shield.

An inspirational leader, he was a key figure in the club’s return to prominence under Sheikh Mansour.

Kompany said: “Sheikh Mansour changed my life and that of all the City fans around the world – for that, I am forever grateful. A blue nation has arisen and challenged the established order of things – I find that awesome.

“I cherish the counsel and leadership of a good human being, Khaldoon Al Mubarak. Man City could not be in better hands.

“It’s a cliche to say it, but it’s also so true: without my team-mates I would have never been here today. We fought many battles together. Side by side. In good times and in bad. So to all of you, from the 2008-2009 squad to today’s domestic Treble winners: I owe you guys!”

Chairman Khaldoon said: “There have been many important contributors to Manchester City’s renaissance, but arguably none are more important than Vincent Kompany.

“He defines the essence of the club. For a decade he has been the lifeblood, the soul, and beating heart of a supremely talented squad.

“A booming voice in the dressing room yet a quiet and measured ambassador off it, Vincent can be as proud of himself as we are of him.”