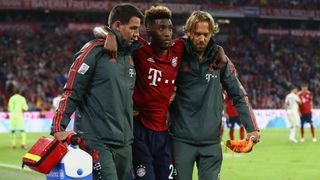 France winger Coman was helped from the pitch late in the first half of Bayern's season-opening 3-1 win after being on the receiving end of a crude challenge from Nico Schulz.

The 22-year-old was making his first Bundesliga appearance since a blow to the same ankle scuppered his hopes of a spot in France's World Cup squad.

While the extent of the damage is not yet known, Kovac is concerned it could force Coman into another lengthy spell on the sideline.

"It doesn't look good for now. He is in severe pain," the Croatian told reporters.

"He will have tests tonight. I hope it's not serious but we are fearing the worst."

Get well soon! We wish you all the best and hope to see you back on the pitch soon Kingsley !  August 24, 2018

Coman's injury and Adam Szalai's equaliser early in the first half appeared set to put a dampener on Kovac's first Bundesliga match in charge since swapping Eintracht Frankfurt for the Allianz Arena.

The champions eventually prevailed after Robert Lewandowski converted a contentious penalty at the second time of asking, before Arjen Robben sealed three points with a late third.

However, an honest Kovac admitted that, had he been in charge, he would not have awarded the game-changing spot-kick that allowed Bayern to retake the lead in the 82nd minute.

Franck Ribery made the most of a Havard Nordtveit tackle and Hoffenheim protests were waved away by referee Bastian Dankert.

"[The foul] wasn't crystal clear," Kovac said. "I wouldn't have given it."