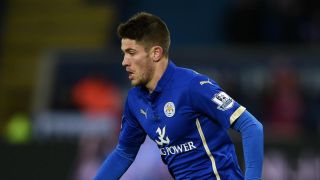 Ranieri said Kramaric, who became Leicester's club record signing when he arrived at the club 12 months ago, should leave to improve his chances of being named in Croatia's Euro 2016 squad.

Kramaric is yet to start a Premier League game this season, with his opportunities restricted by Jamie Vardy's record-breaking form and the arrival of Shinji Okazaki from Mainz.

"He needs to play," Ranieri told reporters ahead of Leicester's Premier League game at Tottenham on Wednesday.

"If he stays with me I am happy, because he is a good player, a fantastic boy, but he doesn't have too many chances to play. I suggest to him to go."

"It is not possible to maintain everybody's happiness," said Ranieri. "He needs to play because in my opinion he is a very good goalscorer with good skills.

"It is not easy for him. He needs to smell the grass."