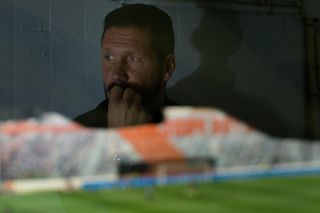 The Argentine coach was served with an eight-match ban on Monday for his conduct during the Supercopa de Espana second-leg win over Real Madrid.

The defending champions faced Rayo Vallecano in their season-opener just hours after the ruling had been announced, and were unable to get the better of their hosts as the match ended in a goalless draw.

Simeone insisted his presence in the dugout would have made no difference to the result, but the onus will now be on the players to prove they can perform without the sound of their vociferous leader barking instructions from the touchline.

A home fixture against a newly promoted side would appear the ideal opportunity to do just that, but Eibar took Spanish football by surprise last weekend when they overcame a build-up fraught with uncertainty to claim an unexpected 1-0 win over Real Sociedad.

The Basque club clinched the Segunda Division title last season to secure back-to-back promotions, but were in danger of having their place in the top flight taken away from them before even appearing in La Liga.

However, after raising the necessary funds demanded by the Spanish authorities, Javi Lara's goal got their season off to a sensational start.

And midfielder Dani Garcia believes the chance to play against the reigning Spanish champions will be the equivalent of a UEFA Champions League final for Eibar.

"Saturday's game will be, for us, as a Champions League final would be for them," he said. "Their budget is several times bigger than ours and they are very strong, but we will try to hurt them.

"Every team has weaknesses and we will try to use them."

Atletico - who discovered on Thursday that they would meet Juventus, Olympiacos and Malmo in the UEFA Champions League group stage - are not expected to have any fresh injury concerns following their uninspiring start to the season, while Eibar could hand debuts to two new arrivals.

Didac Vila has joined the club on a season-long loan from Serie A giants Milan, while Saul Berjon has arrived on a two-year contract from Murcia.