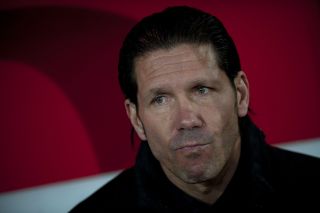 Diego Simeone's charges fell victim to a 2-0 defeat at struggling Almeria last weekend, with a double from Jose Antonio Verza doing the damage, leaving Atletico level on points with Barcelona and Real Madrid at the top of La Liga.

Verza's second goal in that game came from the penalty spot, when goalkeeper Daniel Aranzubia was shown a straight red card for hauling down Jonathan Zongo.

His card was later rescinded, however, which will provide a welcome boost for Simeone, who may once more be without regular stopper Thibaut Courtois due to a thigh complaint.

The loss to Almeria was sandwiched by 3-0 and 2-0 defeats to city rivals Real Madrid in the Copa del Rey semi-final, and Simeone will be keen to halt the run of three straight defeats.

Despite that run, Atletico's loss at Almeria was just their second in the league this term, and they had previously gone 13 league matches without defeat.

Furthermore, Simeone's side boast an undefeated record at the Vicente Calderon in the league this season, and with just one victory on the road this term Valladolid's chances of winning appear slim.

As well as doubts over Courtois, Atletico will be without midfielder Tiago (knee) and defender Javier Manquillo, who fractured a vertebrae in the Real defeat on Tuesday.

Valladolid may have struggled on their travels this season, but they head to the Spanish capital on the back of a three-match unbeaten run in the league.

A 1-0 home win over Villarreal has been backed up with draws against Getafe and Elche.

Despite those positive results, Juan Ignacio Martinez's charges remain mired in relegation trouble, and are three points adrift of safety in 18th position.

Their prospects have been hindered by an injury to forward Jeffren Suarez, who could miss over a month of action with a muscle injury.