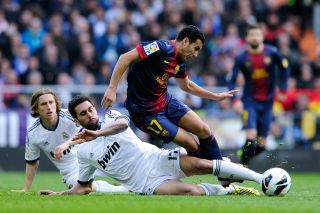 The Catalan giants last won a league fixture against Real Madrid in December 2011, as they came from behind to win 3-1 in the Spanish capital.

And although Copa del Rey and Spanish Super Cup wins have since followed, Barca will be determined to end a run that has seen them take just one point from their last three league meetings with Real.

Gerardo Martino's table-toppers are the only side to avoid defeat in La Liga this term, having recorded eight wins and one draw.

They were held to a goalless stalemate at Levante last week but will hope a return to the Camp Nou - where they have won their last 19 Liga matches - helps them return to winning ways.

Real Madrid sit third in La Liga, three points adrift of Barca, with their only loss of the season coming against neighbours Atletico Madrid last month.

Both sides have new stars determined to make an impact in their first Clasico - Neymar in Barca's case, and Gareth Bale in Real's - while managers Martino and Carlo Ancelotti will also experience their first taste of Spain's fiercest derby.

Brazilian Neymar has scored three goals in 13 appearances since moving from Santos and has claimed the fixture is the biggest in club football.

"Even though players might never have participated in one, they understand the importance of a game between Barcelona and Real Madrid. A Clasico is the pinnacle for any player," he said.

While much attention will focus on the impact of Neymar and Bale - the latter having returned from a back injury against Malaga on Saturday - Cristiano Ronaldo and Lionel Messi are more than likely to steal the show.

Widely regarded as the two best players on the planet, both have made an outstanding start to the current campaign, with Ronaldo's brace in a 2-1 UEFA Champions League win over Juventus on Wednesday taking him to 15 goals from 12 appearances this season.

Four-time world player of the year Messi, meanwhile, has 12 goals in nine outings.

Real boss Ancelotti was happy with his side's win over the Serie A champions and hinted at Bale being involved from the start in Barcelona.

"We've now played three games with this formation (4-3-3). The team are comfortable with this system and we are not going to change it. Gareth Bale likes to play on the right and he will always play there," said the Italian.

"The team are confident. We now have to go to the Camp Nou to win, and we will need to be at our best - showing our best qualities."

Real will be without midfielder Xabi Alonso, despite him returning to training following a broken foot, while Barcelona defender Jordi Alba (hamstring) will also miss the fixture.

Historically, Real Madrid have shaded the clash, winning 90 of the 224 competitive matches, with Barcelona winning 86.

They have also enjoyed the better of Barcelona in recent times, with Ancelotti hopeful that continues on Saturday as Real bid to go level on points with their rivals and claim the early Clasico bragging rights this season.