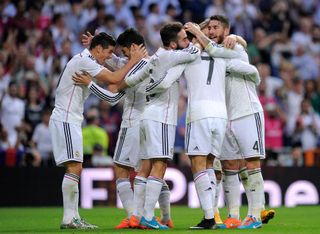 Carlo Ancelotti's side have won 10 consecutive games in all competitions - most recently dispatching third-tier Cornella 4-1 in the opening game of their Copa del Rey defence on Wednesday.

Raphael Varane scored twice in Catalonia as a makeshift Real side went in at the break 2-1 up - part-time electrician Oscar Munoz equalising the first of the Frenchman's headers to give neutrals hope of a shock result.

Javier Hernandez and Marcelo netted after the interval to secure the comfortable scoreline, which Real will defend in the tie's second leg in December.

As attentions switch back to matters in the league, another victory on the weekend will see Ancelotti rack up the longest winning streak of his career.

Cristiano Ronaldo was rested for the Copa trip and his usually supreme confidence will have been even further boosted with a goal in last week's 3-1 El Clasico success, being named La Liga's best player at a midweek awards ceremony and his subsequent naming on the Ballon d'Or shortlist this week - another gong he is odds-on favourite to win.

Ronaldo has helped Real score 23 goals in recent wins against four of the league's bottom six and 14th-placed Granada are not in the kind of form which suggests they will provide a stern test.

Granada snapped a four-game losing streak with a 1-1 draw at Eibar last weekend but a run of three goals scored in their last seven games will do little to worry Real's defence.

That ensures Ancelotti has plenty of options at his disposal this weekend, though Gareth Bale is still recovering from a hip muscle injury.

The Italian has rightly been high on confidence this week but was forced to defend his team's tactics after Barcelona legend Xavi blasted them for only counter-attacking during the Clasico.

Ancelotti responded to the Barca captain's claims: "That's his opinion, that of a great player.

"Real Madrid's counter is tremendous but you also have to have control of the game and pressure well.

"That is what we did against Barcelona. I don't see it as a lack of respect, it's the opinion of a player who has extraordinary experience."